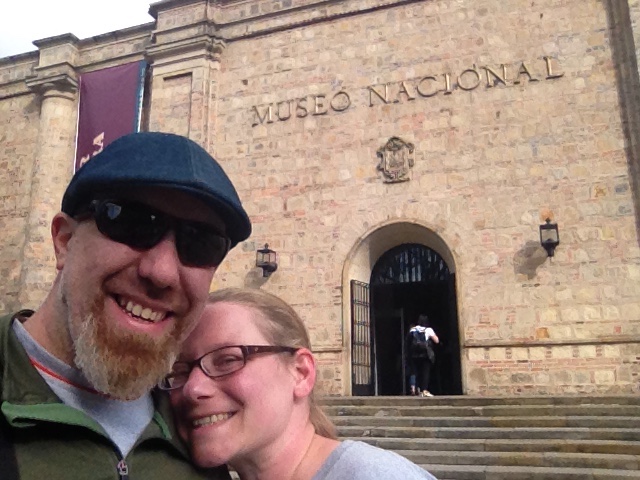 In the center of Bogotá, Colombia there is a museum that attempts to encapsulate the entire history of the country, the Museo Nacional. The museum features tons of historical elements, incorporating both pre-Columbian and more modern day relics. It contains a vast array of archeological artifacts from indigenous groups such as the Muisca, Zenú and Tolima, explaining the history of these peoples, focusing on depicting their traditional ways of life, cuisine, technologies, craftsmanship, farming techniques, mining, music and art, as well as other cultural aspects. The interactions among different cultures are explored and the relationships with the invading Spanish conquistadors is examined and brought to the foreground. The museum exposes the tumultuous and often violent past of the Colombian nation. This is highlighted by the history of the building itself, which formerly served as Bogotá’s largest prison.

Through artifacts, exhibits, religious and modern art, musical instruments, jewelry, audio recordings, photographs and videos, the Museo Nacional strives to paint a complete picture of the history and culture of the peoples that have inhabited, and continue to inhabit, the region of South America known today as the República de Colombia.

The Museo Nacional in Bogotá is enormous. It took us three days to visit the entire museum, although we only needed a couple of hours on the last day. The museum costs 4,000 COP, roughly $1.40 in US dollars, which is 3,000 COP for the entry and 1,000 COP for a voluntary donation to the Amigos del Museum. Although the 1,000 COP is a voluntary donation, they charged us for that anyway on our first visit to the museum. The second time we went, the guy at the ticket counter remembered us and only charge us 3,000 COP.  The museum is free on Sundays and also on Wednesdays from 4:00pm to 6:00pm.  Since we only needed a little bit of time for our third visit, we decided to go at 4:00pm on a Wednesday afternoon to wrap up our visit to this spectacular museum.

Here are a couple pictures of us posing with the statue of the bust of Simón Bolívar.  Simón Bolívar, also known as El Libertador (The Liberator), was a key political and military figure that played a most significant role in gaining independence from Spain for many South American countries including, Colombia, Venezuela, Bolivia, Ecuador, Perú, and also Panamá. 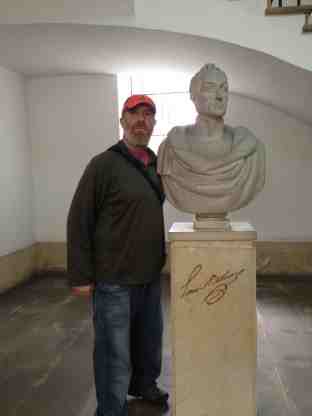 Here are some examples of the pre-Columbian and Indigenous artifacts on display, including ceramic anthropomorphic figures and gold adornments: 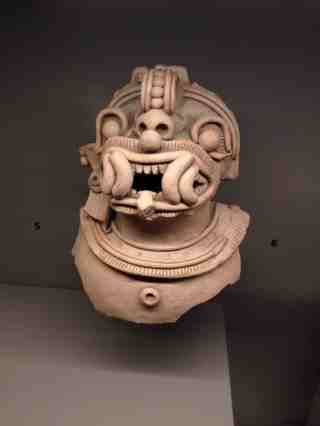 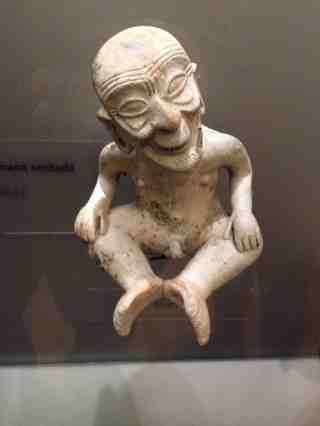 Funerary urns made to house remains of entire families: 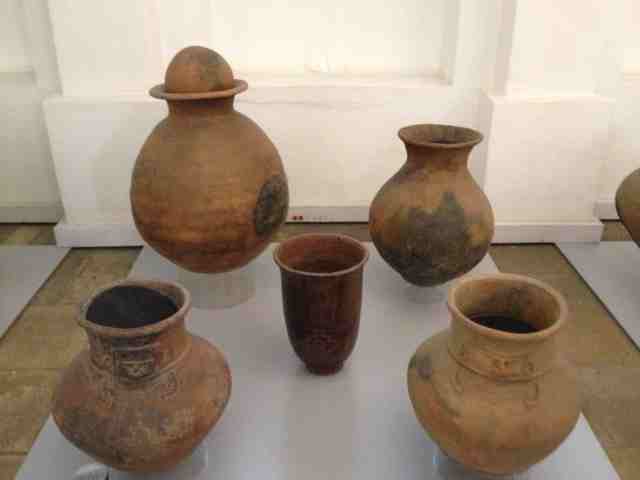 Here are some indigenous masks: 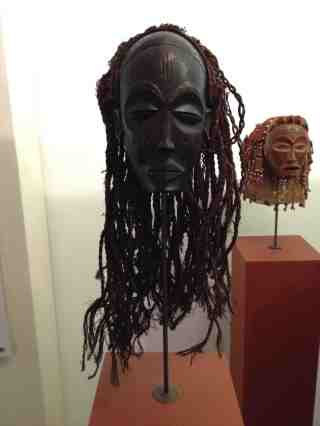 A special section of the museum is dedicated to the various indigenous cultures that are still present in Colombia.  Many of these native groups are nearing extinction.  This photo shows a list of these endangered indigenous peoples: 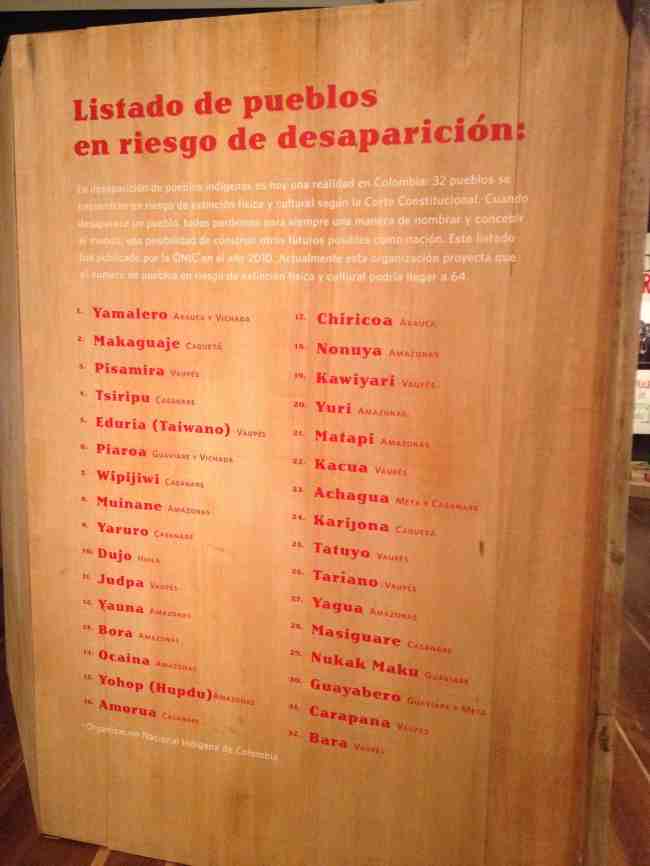 Here are drawings done by some indigenous people depicting the atrocities committed against them: 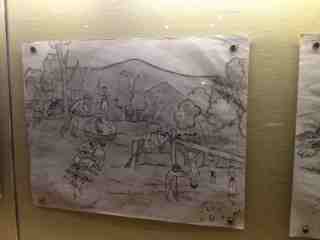 Although the violent acts perpetrated against them were horrendous, many indigenous groups prefer to view this period as a new beginning rather that a horrible defeat.  It is this perspective that gives them the courage and motivation to persevere.

In addition to vast amounts of objects made with gold, the Museo Nacional also features many of Colombia’s other resources as well.  Here are examples of emeralds and salt which are both of great abundance in Colombia: 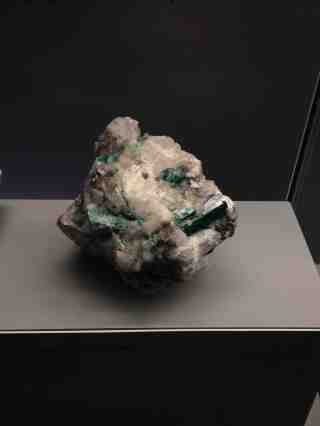 For photos of many artifacts made from Colombian gold and emeralds, please see our post about the Museo de Oro (Gold Museum) and Museo de la Esmeralda.

Jorge Eliécer Gaitán, a Colombian political figure who opposed the continuing violence that was plaguing the country, was assassinated on April 9, 1948. Many believe that his popularity would have led him to become the next president of Colombia. His assassination led to the armed uprising known the “Bogotazo”, which destroyed a good part of the city and Bogotá, and also lead to a very violent period in Colombian history known as “La violencia”.

Here are some photos showing the destruction of Bogotá after the “Bogotazo”: 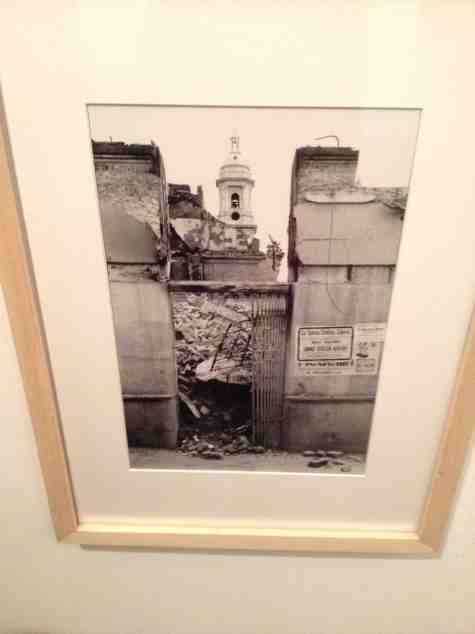 An artistic depiction of the Bogotozo and its effects on the country by Colombian painter Alejandro Obregrón Rosés, titled “Masacre (10 de abril)” (April 10th Massacre):

Earlier in the 20th century, Jorge Gaitán had become a very vocal opponent of the atrocities and killings committed against many indigenous people that were “working” harvesting bananas for the United Fruit Company. Although the company was  producing millions of bananas annually, they claimed to not have any workers and were therefore not subject to any sort of labor regulations. The real workers however labored day and night in slave-like conditions, being paid practically nothing if they were paid at all.  They were forced to work long hours without breaks and often without food or water.  They were expected to meet unrealistic quotas and were subject to severe punishment and loss of pay if they failed.  In 1928, the exhausted workers became fed up with the inhuman conditions of their forced labor and many gathered together in a large protest.  Thousands of workers refused to cut bananas for the company and had effectively began a massive strike.  Threatened by the protest, representatives of the United Fruit Company came to meet the protesters to “come to a resolution”.  However, they did not come to exchange words or come to any sort of fair agreement.  Instead they began to open fire on the unarmed gathered masses with countless rounds of artillery.  Hundreds of indigenous workers were murdered and the United Fruit Company went on with business as usual. Most politicians were silent, but Jorge Gaitán spoke out publicly against what was known as La Masacre de las Bananeras.

The museum had a phone receiver that you could pick up and listen to an audio recording of Jorge Gaitán speaking out against the perpetrators of the Banana Massacre and accusing the local authorities of serving the interests of the United Fruit company.  Pictured in these photos are the phone receiver with the Gaitán recording and a political cartoon depicting two officers bragging about how many banana workers they murdered: 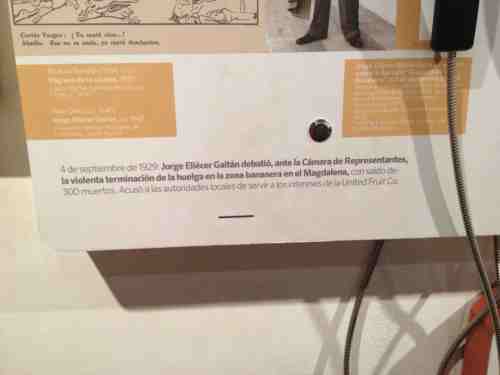 Just as in most of the Americas, slavery was a big business in Colombia.  Here are a few of the slavery-related relics on display at the Museo Nacional: 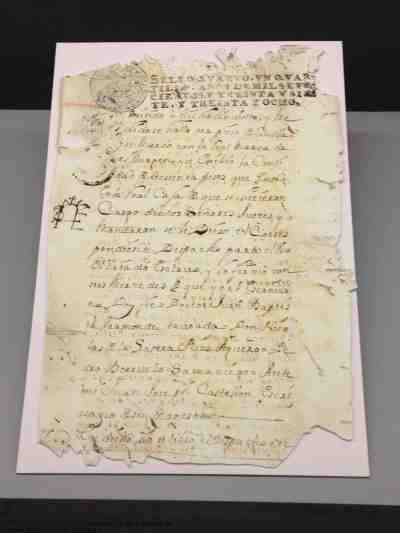 In the first photo is a register of a shipment of slaves arriving to Cartagena.  The symbol drawn on the left side of the document is the symbol that was branded on each of the slaves of this particular shipment. In the second photo is a reproduction of the 18th century instrument that was used to brand slaves, marking them as slaves belonging to a particular shipment and owner.

Here is a document explaining the law that eventually gave freedom to the slaves: 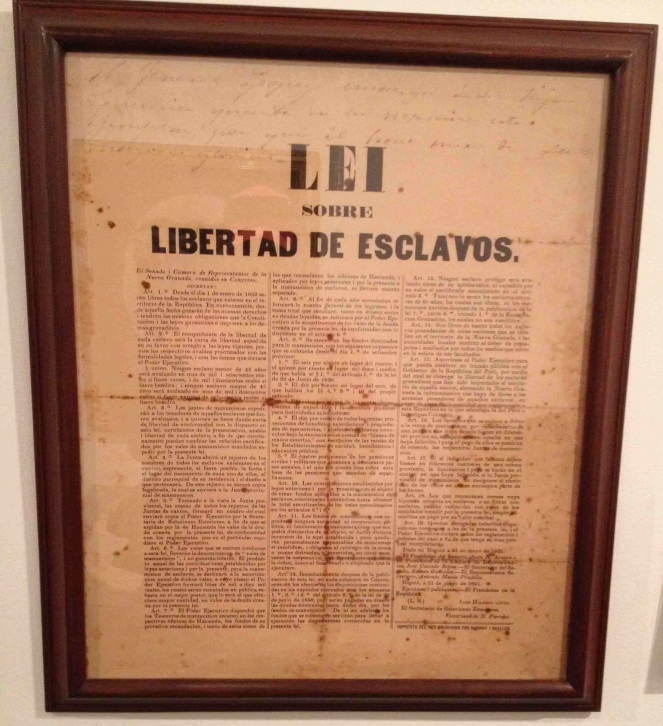 At 22 years old, Policarpa Salvarrieta was a seamstress to the wives and daughters of the Spanish soldiers and royalists. She used her position to learn information about the plans of the Spanish military during the reconquista. She became a spy, revolutionary leader and a recruiter for the revolutionary forces. In September of 1817 she was captured and in November of that year she was set to be executed by firing squad. On the morning of November 14th, she was led with seven other revolutionaries, including her lover, to a scaffold in Bolivar Square. She refused to kneel, turned toward her executors, and yelled her final words, “I have more that enough courage to suffer this death and a thousand more.  Do not forget my example”. 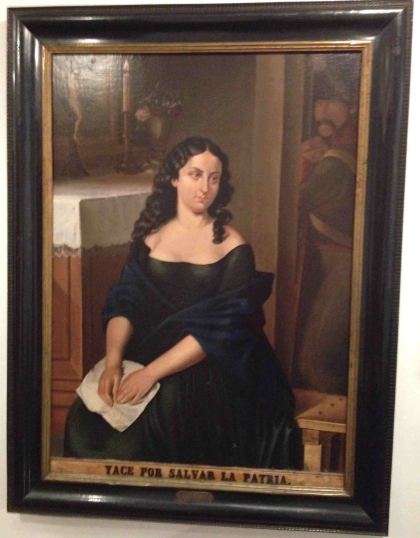 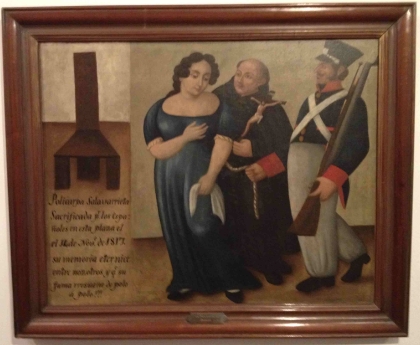 The first photo shows a portrait of Policarpa, and the second is a painting depicting her being led out to Bolivar Square for her execution.  Her portrait appears on the 10,000 Colombian Pesos banknote.

Antonio Ricuarte was a high-ranking member of Simón Bolívar’s army. In 1814, during the wars of independence, Ricuarte, along with several soldiers, was guarding Bolívar’s estate in San Mateo. The Spanish royalists began an attack on this stronghold.  Ricuarte realized that it would be incredibly detrimental to their cause if the estate were to fall into the hands of the royalists, leading to the defeat of his forces. He sent his troops away from the estate to rejoin with the rest of their forces.  He held out alone, as long as he could, surrounding himself with large quantities of gunpowder.  When at last the Spanish forces broke through and had him surrounded, Ricuarte made the ultimate sacrifice.  He quickly sparked a fire, igniting the gunpowder and causing a massive explosion which killed himself as wells as several dozens of Spanish troops. Sacrificing his own life, he prevented a defeat at the hands of the Spanish forces.  This painting is a depiction of that crucial moment during the wars of independence where Ricuarte sacrificed his life for the cause of his people:

Francisco de Paula Santander was a military general for Nueva Granada (now Colombia) during the wars of Independence.  He later served as president of the Républica de Colombia from 1832 to 1837.  This painting shows the death of the beloved general:

During the Republican Union, General Rafael Uribe Uribe used his voice in government to speak on behalf of workers and their rights. His opinions often clashed with his Republican counterparts. While he was on his way to a session of Congress, carrying a proposal that aimed to protect Colombian workers from accidents on the job, he was brutally attacked with axes by Jesús Carvajal and Leovigildo Galarza, dying later that day.  Here is a portrait of the general and a photo of the axes that killed him: 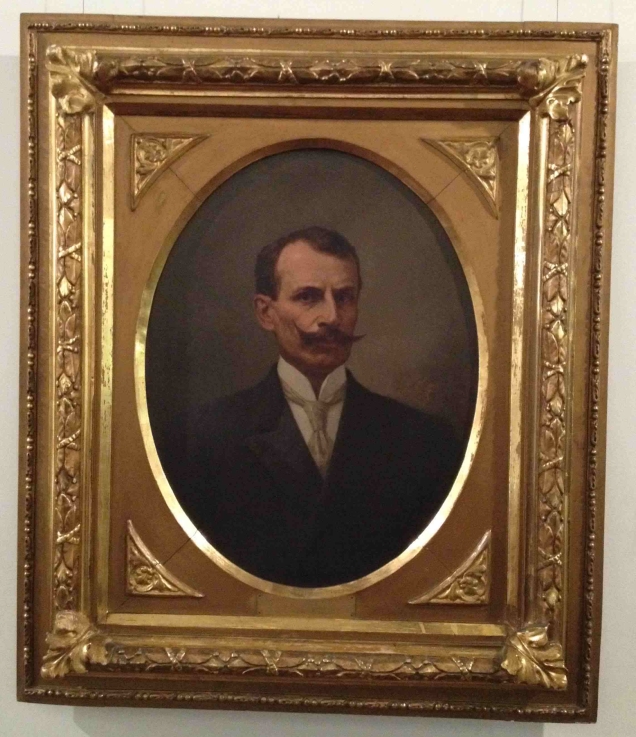 THE GOVERNMENTS WANTS YOU (WELL, JUST YOUR MONEY AND JEWELS)

More than once in Colombian history the government asked its citizens to donate money  for the national defense.  They would issue propaganda posters encouraging the people to fulfill their duty to help protect the country by donating money and jewels to be used for defending the nation.  Many people sent large sums of cash and countless other objects of value.  The jewelry was supposed to be sold and the money used to support the national defense.  However, many of the banking institutions that received these valuable objects decided that they were too precious to be sold and simply just held onto them “for safe keeping”.  Many of these items are now on display at the museum.  Here are few photos depicting this phenomenon of citizen contributions to the national defense of Colombia:

The battle of Boyacá on the 7th of August in 1819 was the first in the cycle of triumphs by The Liberator, Simón Bolívar, and the Liberating Army in the war of independence in the Región Septentrional de Suramérica.  It was a turning point for the forces in favor of independences and it led to many subsequent victories.  This painting is a depiction of the Battle of Boyacá, one of the most important military actions in Colombia’s history:

Another crucial victory for the independence movement took place at lake Maracaibo.  See this wikipedia page for more information about the Battle of Maracaibo.  Here is a rendition of the naval battle by José María Espinosa Prieto:

In addition to all of the historical, indigenous, political and artistic objects on display at the Museo Nacional, there is also an abundance on religious art.  Here are just a few examples of the thousands of religious pieces exhibited at the museum: 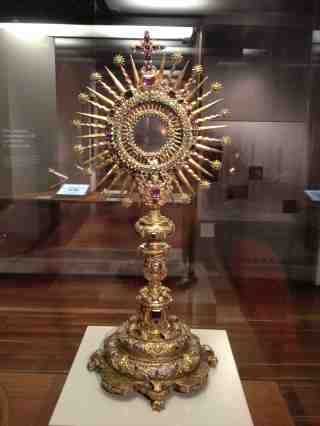 To leave the museum you go through the courtyard which is quite beautiful. Many cats live there and they protect the museum during evening and early morning hours.  Here are a couple photos from this area:

This blog post does not even cover one percent of what lies within the Museo Nacional in Bogotá, Colombia.  If you ever visit the city, a visit to this museum is a must, especially if you enjoy learning about the history and culture of Colombia.  Just be prepared to spend many hours wandering around, browsing the priceless offerings of the Museo Nacional.

Stay tuned for many more adventures from SAK and JAC!!!

View all posts by sakandjac

No Sleep Till Bogotá! 🇨🇴